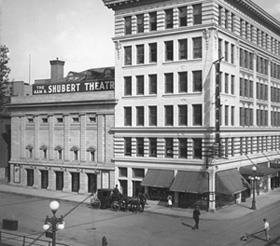 This theater dates back to 1910 and is rumored to be haunted by a ghost named Ben, believed to be a former stagehand, and Veronica, a former actress. The building went through a restoration in 1985 and workers removed a false ceiling and found a second balcony where there was a note written to Ben. Since this happened, a male apparition has been seen and the workers tools have been found moved. Veronica's singing has also been heard in the auditorium.