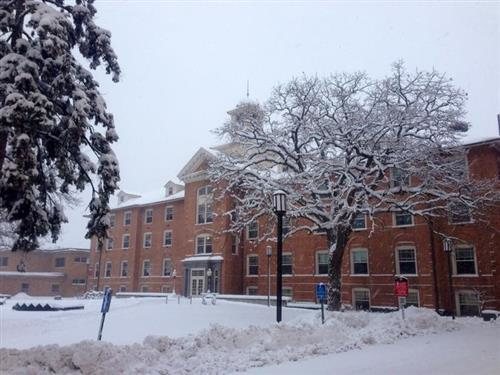 There are four locations that are rumored to be haunted at this university. One is Shoemaker Hall, where a pregnant student hanged herself in a basement meat locker after she had an affair with one of the janitors. Her ghost is known to move objects around, make clocks flash the wrong numbers, and float over the beds of students. At the 1911 Riverview Hall, a spirit of a woman has been seen and heard lingering the hallways with her high heels clicking. The ghost of a young child is also said to roam around the hall. The James W. Miller Learning Resources Center is believed to have been built over a graveyard and there have been some sightings of apparitions here. One of the spirits here is a 19th-century soldier. The oldest hall on campus, dating back to 1904, is Lawrence Hall and it is haunted by the spirits of a bald man that has been seen along with flashing lights. Many believe they linger from a 1950 case where a janitor killed two instructors.